UnionPay Wallet is a mobile payment app by UnionPay, China’s only and the world’s largest bank card issuing agency. While interning at Frog, I solely designed and prototyped one of its key business-facing features, the merchant portal, improving its information hierarchy and visualizing transaction data. After the design updates were shipped, the app’s DAU doubled from 150 million to 300+ million. 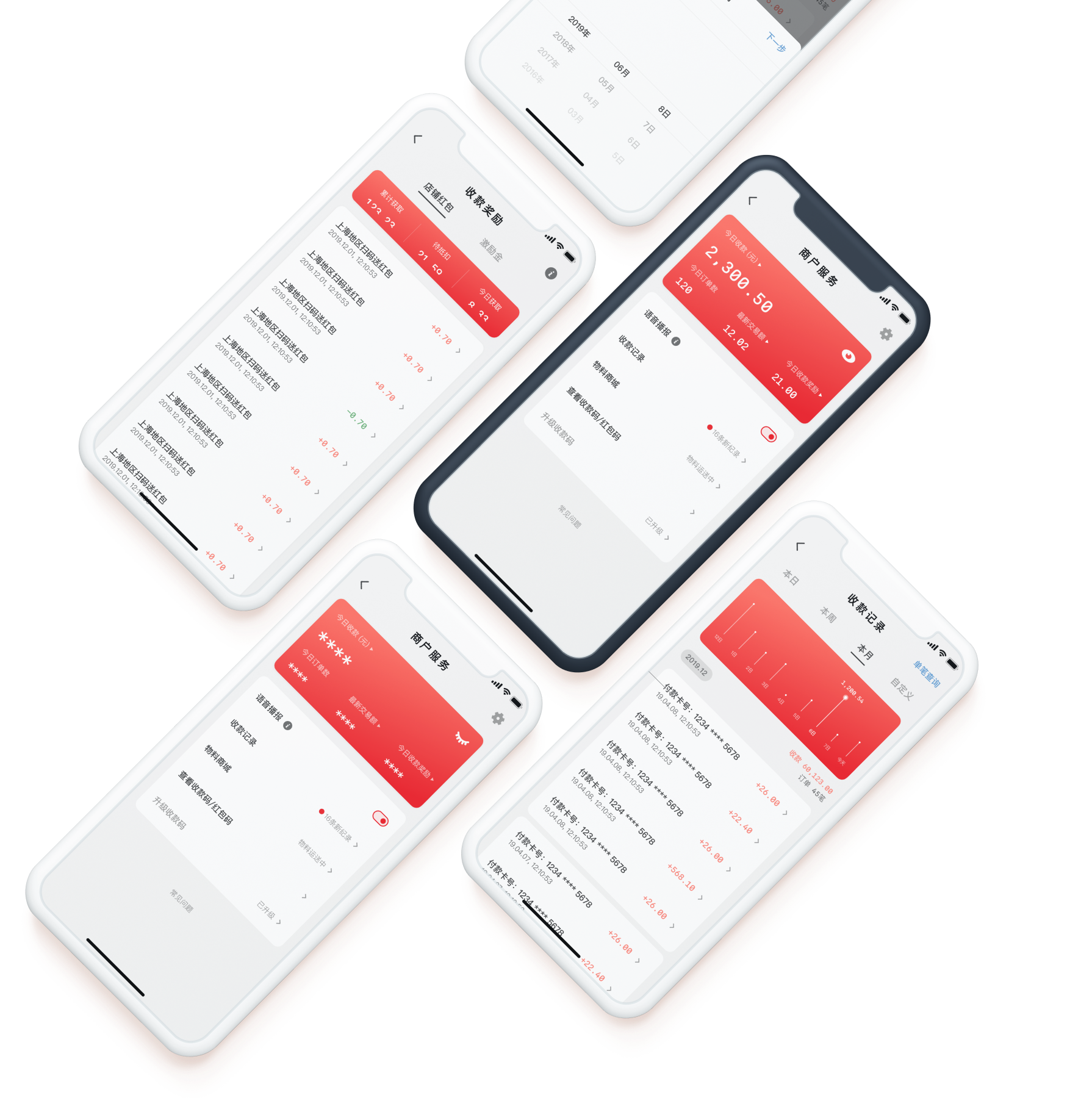 UnionPay issues bank cards in China just like MasterCard would in the US. Recently, it has started to expand into transaction processing (like PayPal) and mobile payment (like Apple Pay). The UnionPay Wallet app is its attempt to enter the mobile payment market, which had been dominated by heavyweight competitors like AliPay and WeChat.

To grow its user base, the UnionPay Wallet app had been giving out cash prizes to small business owners who accept payments with it. The Merchant Portal was where users would see these cash prizes, and where they would find all business-related functionality. Yet despite heavy incentives, user growth and brand loyalty had stalled. How could design help?

How do we improve UnionPay’s ROI on cash incentives given out to small business owners?

6 months after design improvements were shipped, UnionPay Wallet’s DAU doubled to 300+ million, and its App Store review rating jumped from 3.1 to 4.4.

After a few weeks of user research, design explorations, and iterations on my own, I used Principle to package my designs into a prototype.

The Merchant Portal hosts a collection of commonly used features for small business owners in their daily operations:

Hover to see numbers
Layout of the existing Merchant Portal before design improvements.

After user interviews, we came up with three personas based on age and occupation:

Existing
The existing information hierarchy was too flat—only a few top-level entry points and a ton of sub-level functionality underneath, making it difficult to form a mental model of where things roughly were.
Improved
The new information hierarchy has more top-level entry points, each responsible for less sub-level functionality, and overall grouped more logically and intentionally. The audio feedback switch, a small but highly used feature, is given top status.

The audio feedback switch was only a simple toggle and used to be buried two-levels deep, but I gave it top prominence since it was the most important functionality in our user interviews. Its importance came from:

“A few days ago, a new customer bought a pair of scissors when I was copying a key for another customer, but I didn’t hear any payment confirmation from my phone. I chased after the customer, who was confused and showed me the e-Receipt. It turned out my app’s audio feedback was switched off, and I was so embarrassed.”

Many of UnionPay Wallet’s small business users are mom-and-pop shops who couldn’t afford full-fledged POS terminals from banks. Instead of increasing new customers, they often focus on building rapport with loyal customers. Damaging their long-term relationship because a payment app didn’t work is near unacceptable.

Hover to see numbers
Layout of the updated Merchant Portal, with simplified information hierarchy. The Audio Feedback On/Off switch is placed immediately under the overview card for quick access.

The whole interface now had a sense of clarity and order due to better information grouping and proper visual contrast. For the less tech-savvy shop mom, I also took extra care in writing the UX copy, adding status-related secondary text to the right side of the menu items.

The existing transaction history view’s information density was too high. Visual hierarchy was poor as many elements had equal emphasis and compete for the user’s attention. It also did not present data trends, forcing small business owners to do a lot of mental calculations to project sales trends.

Hover to see numbers
Layout of the existing transaction history view. This design did not help the small business owner project sales trends in any way, forcing him/her to do a lot of mental legwork.

It has all the merits of a bar graph but is visually more lightweight.

Proven effectiveness and easily understood by most people.

Visually boring; could not fulfill the client’s “be different” requirement.

Visually interesting and also easily understood by most people.

Too much emphasis on highest- & lowest-earning dates, sacrificing the ability to project other sales trends.

Really the best around—looks like a bar graph so very understandable; area shape could handle much higher data density (e.g. a year’s transactions).

UnionPay servers could only fetch the last 3 months of data, making it an overkill.

The area graph came in second place after the line graph, and it also had the unique advantage of allowing the viewer to discriminate large amount of dense data (especially useful when viewing yearly transactions). It was eventually dropped because UnionPay’s servers simply couldn’t feed a year’s worth of data quickly enough.

Hover to see numbers
Layout of the updated design for viewing transaction history and data visualizations. We decided to propose a new feature that allows the user to quickly look up a single transaction by scanning a QR code or typing its e-Receipt number.

Just as illustrated above, one of small businesses’ persistent pain points was the awkwardness in asking a customer for payment confirmation. It’s embarassing and trust-damaging when the owner accuses the customer of basically stealing and the customer proceeds to show proof of payment. And yet, these incidents regularly happen as payment audio feedback could be inadvertently turned off. To mitigate this issue, we offered a quick way to look up single transactions on the app.

When displaying only today’s transactions, the data visualization card is by default hidden.

For the low tech-literacy shop mom, a layout with stronger visual hierarchy and clearer copywriting can be more reassuring. For both the tech-savvy younger shop owners and the UnionPay brand ambassadors, our improved info architecture makes it easier to discover new features and merchant rebates, as well as quickly trouble-shoot problems. Whereas all users previously had to do much mental math to project sales trends, the newly added data visualizations would be of great help.

We conducted follow-up interviews after the designs were shipped, and I was proud to find that small business owners felt the Merchant Portal was much easier to use.